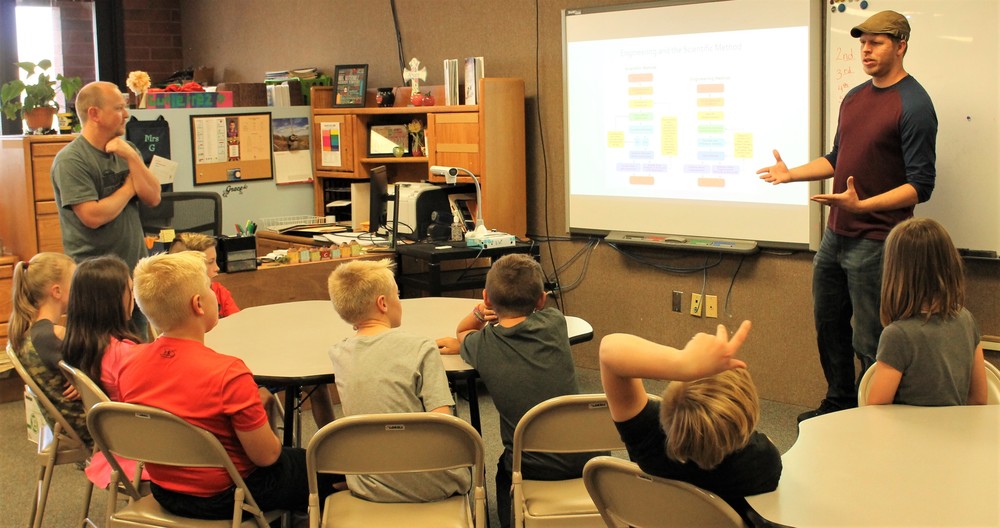 The Creekview Chiefs have a new look this year, yet the programs that have been successful over the years are continuing. "One of the big things we have done is that we have gone away from having the houses in the school (groups of students banded together from different grades based on STEM (Science, Technology, Engineering and Math) but we have kept what we liked about it and have made some changes," said Principal Keith Palmer. "The students have been put into teams (10 of them) and so with more of those the groups are smaller. It is also not a competition between these teams like it was with the houses. It's about goal setting and working together to achieve things."

The students have been selecting names for their teams  that are being chosen from famous scientists, mathematicians, engineers and others. Palmer said they are using the teams to recognize positive behaviors. There are 10 teams with about 47 students per group, with six to nine students from every grade making up the groups. Each team is headed by two teachers and one aide. While Palmer said the competition between the houses was something many on the staff did not feel very good about, they did like the mentoring part of the house system, with different ages of students working together. "We have made an acronym out of the word Chief which is Cooperative, Hard Working, Improving, Excellence and Focus," he stated.

The students get cards with those attributes on them and when they get a check from a staff member for one of those, the card goes in a drawing the school holds. Obviously not every card gets drawn, but there is another avenue in which students can be recognized as well.
"If a student gets all five attributes marked in a quarter they become an Ultimate Chief and they get recognized for that," said Palmer. "That is not an exclusive thing. If all 500 kids in the school get five marked,  then they all get recognized. We want them all striving for those characteristics."

One of the main things the schools staff realized is that they didn't have a good handle on what the behaviors of the students in the building were, so they are setting a staff goal of tracking student behavior so they know what areas to concentrate on, and so they can consequently measure improvement.  "We have been working hard to let the students know what is expected of them and we have added a refocus room so they meet with a behavior aide before they have to come to my office over problems," he said. He explained that clarity is important for everyone, so students know what to expect and teachers know what they should do when problems arise.

There is also a drawing that is held based on reading goals as well. Every time a student improves a level in reading, based on the district's reading program, they get a card in a drawing. That prize is even a bigger prize than the ones for the behavior goals. "We want them to be reading all the time," explained Palmer. He said the data coming in on reading improvement in the school is exciting, even this early in the year. "The growth from the first of last year to the beginning of this year is wonderful," he said. "For instance last year at the beginning of the year, fourth grade assessments that were given showed that only three percent of the students were on the reading level they should be at the end of the school year. Going into this year it was 16 percent.  So the levels that the classes are beginning with are much higher and not only that, the other levels that they are dealing with are not near as far behind as they were last year either. We will see it grow and grow and grow."

He said once the kids were tested this year it showed the regression in reading levels during the summer was not near as bad as had been expected and that some students even grew levels over the break. "We also don't want to discourage kids who have maxed out on their reading levels," he said."Those students will still get a card for the drawing for every 1000 pages they read." The drawings are done during the team meetings and the school gives away 10 items per team. The first five are five dollar gift cards and the other prizes are other small items. "We recently did the first drawing the kids were excited," he said. "No matter what they get they are happy to know they won. We just want to focus on the positives."
Palmer said the school is looking for a community partner with which to cooperate on an engineering or real life science project. "We want something the students can do that has a real life impact," he said. "The students want to see that what their projects do, really does amount to something tangible."  They do have one on-going instructive partnership already up and running. Intermountain Electronics meets with small groups of fourth and fifth graders on engineering principles and information about what they do once a week. Those meetings are planned for a seven week run.

As for activities the school is planning on their literacy night, technology and engineering night and their science fair for this year, but no dates have been established as of yet to when those will be held.