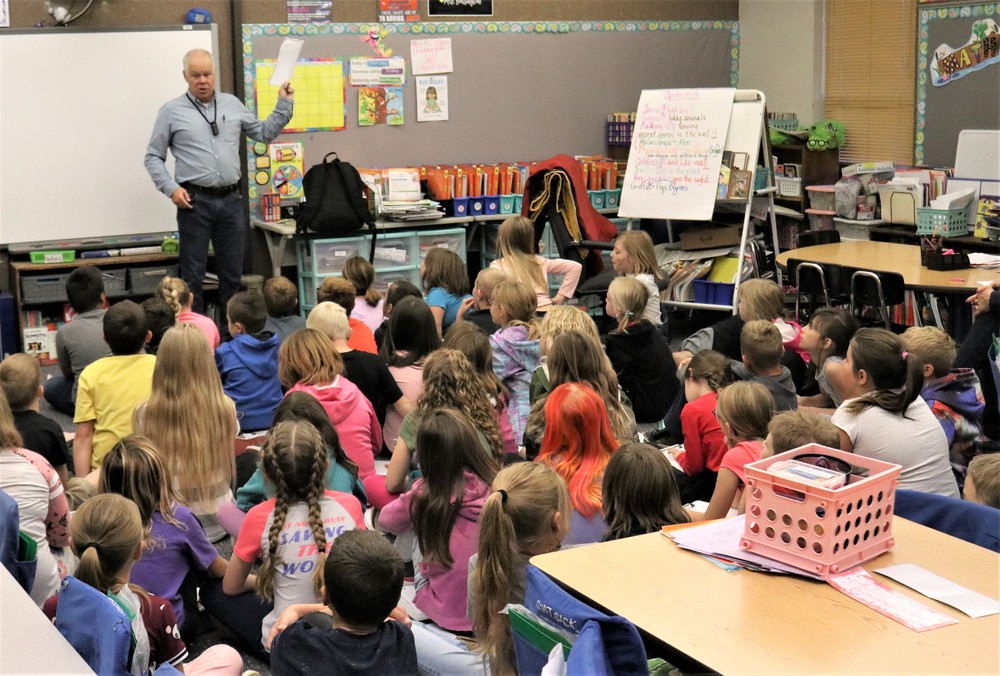 Sometimes it is good to go to the source of what exists and find out about it from there. In the case of Sally Mauro Elementary, the year began doing just that with reading and writing. In early October the school had an author named Gary Hogg come and talk to students, and he performed a program they will not soon forget.

“We brought him in because we really want to push our students in writing,” said Principal Blake Allen. “He came to motivate the students. Writing is a hard thing for kids. I think that by bringing him here it will get the students over that little hump many of them have about writing.”

Hogg came for the day and gave an assembly and then spent the rest of the time in classrooms talking to students about their ability to tell stories through the written word.
This all ties in with the emphasis on students reading abilities.

“We are really pushing phonics and getting kids to read at their grade level,” he said. “Testing is changing and now kids are going to be only tested on writing in the fifth grade. But we want that kind of thinking to start early and so we are emphasizing it.”

Allen said that the smart goals the school has set this year in a number of areas are a priority and one of the things they are doing is setting up a data board in the hall so everyone can see how the school is progressing on those goals. But this isn’t going to be just a bulletin board with graphs or a bunch of numbers.

“We actually decided to make the data board a train with Big John (Helper’s mascot that is the tallest coal miner) as the conductor,” he explained. “We have recruited Ben Steele, a local artist, to create the train and it will be displayed right in the main hall. We wanted something local to display the data.”

He said the data board that is being created is not just a one year shot.
“We wanted something that we could change and adapt to the goals each year,” stated Allen. “It will be something the students as well as the community can come in and look at and be proud of. It will be visible to everyone who comes into the school. There will be a lot of local symbolism on the train. The ideas for that are still coming in.”

This year the school’s students are also divided up into houses of different colors. The day that Allen was talking about his school and the house program, the result of a competition was to be realized. A winning house based on their performance gets to do something fun to an adult that helps to lead that house and in the case of that day, Allen himself was going to be saran wrapped to the flagpole in front of the building. It was also going to be done at a time when school was getting out and all the walkers and the kids riding the bus could see him as they left the campus.

Being a brand new principal, when for years he taught school at Castle Heights Elementary, has been a big change for Allen, but a very good one.

“It is so different being a principal compared to being a teacher,” he said. “My charge is to give our teachers, who are all professionals, the necessary tools that they need so they can accomplish the goals they have set for their classrooms and for the school. The fact is that everyone here, staff and teachers are amazing. They have made me very comfortable with their support and hard work.”