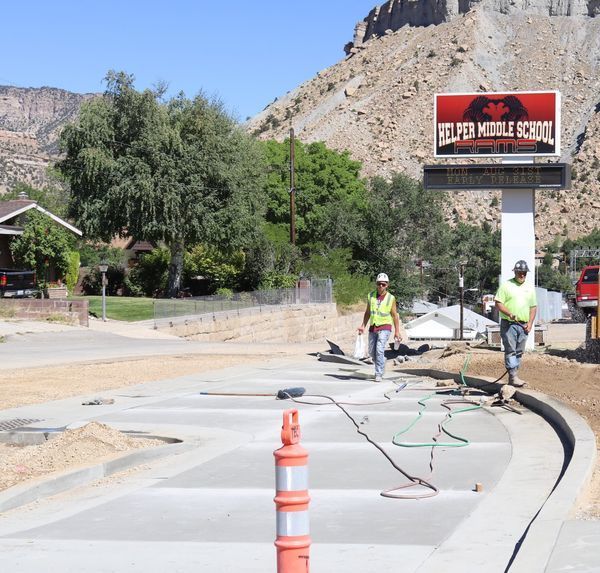 Construction in and around Helper Middle School greeted students as they came back to campus on August 19, with the modification of the site to accommodate a bus lane in front of the building being the first glimpse of what was going on.

For years the buses have pulled up on Uintah Street in front of the school, often blocking traffic, particularly when a lot of vehicles were parked along it. Now the buses will have their own lane to pull into, and it will not only be more convenient for everyone, it will be safer as well.

The recent announcement concerning changes to the on-going remodel of the school building itself has been received by almost all as a welcome message. That plan, being a rebuild of the main part of the building in a different configuration from what was originally put out last year, shows favor among many.

“I have heard nothing but positive about the new plan,” said Principal Robert Bradley. “The people I have spoken to have been in favor of the changes. Everyone seems very excited about it.”

Also, new and more detailed plans are being generated as the ideas for the remodeling moves along.

“As we do this we are getting different versions of how it will be laid out by the architect,” explained Bradley. “I like a lot of what I see, but we also need to get the school’s staff to comment on what is being drawn up before the construction itself begins. These plans for the building will expand our abilities to handle more students more effectively.”

While Helper Middle School has a small student population now, that is changing.

“We have seen enrollment in our school increase over the last two years than we have seen in the last eight,” he said.

Changes in demographics and in how people are working and living may well bring more growth to the school and the new facilities will accommodate that well.

But a school isn’t about construction or capital expenditures, it is about educating students, and that goes on despite all the new construction activity around the building.

The challenge for all schools this year has been the pandemic, and Helper Middle School has risen to the challenge. Students are going to class and even with masks on the instruction is moving along.

“This is a seminal moment for education,” said Bradley. “The idea of school only being a brick and mortar building, that line is starting to blur. We are learning so many new aspects about how we can do things. There is a lot of amazing technology that has been in process for many years with only a handful of teachers taking advantage of it. But there hasn’t been the need to push general instruction into using it. Realistically if people are teaching the way our age group used to learn in school, they are missing some opportunities. Rather than just learning facts, education is shifting towards the process of knowledge gathering and evaluation, forming opinions and arguments.”

The restrictions concerning group gatherings and social distancing has affected how the school operates. That has been a problem for many school activities.

“It’s sad because other than the opening assembly we had, in which we practiced social distancing, we haven’t really been able to have any other large gatherings,” stated Bradley. “However we have been lucky in that we are still having sports, which also has its own requirements to keep things as sanitary as possible. Because of all that there aren't really any clubs that are happening just yet. We are still working out how to make some of the normal activities happen. I think that is the problem everywhere in schools right now. Everyone is in that same mode of what a drama club should look like or how does Quiz Bowl function. Eventually we will get there, but we are not there yet.”

Bradley said that besides the bus lanes there is some initial work being done around campus on the project, but the big construction on the building will probably begin in the spring of 2021.