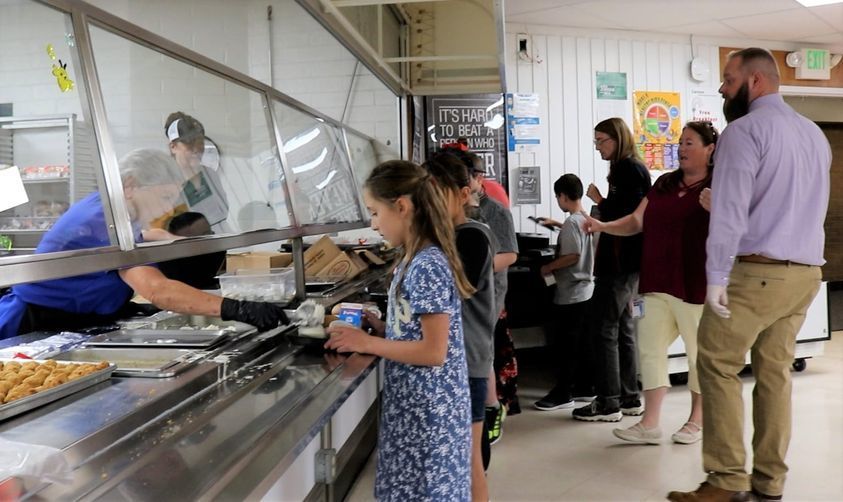 While schools are in place to teach academics, they also must manage student behavior and indeed improve it. One of the big items on the agenda for Sally Mauro Elementary this year is to use positive reinforcement with students to improve their behavior at school along with enhancing their outlook about what it means to go to school.

“One of the things we are doing this year is sending snail mail postcards home to the students for good behavior,” said Blake Allen, the school's Principal. “I am asking teachers to send home three postcards a week to students who are exhibiting good behavior. These are not for the parents but are sent straight to the students. Each one has a note to the student they are sent to telling them how valued they are.”

The postcards are special cards with the Sally Mauro Bull on them and a lot of space for teachers to write positive comments about the student it goes to. Allen said that the idea came from Mont Harmon Middle School where they have been doing this for some time.

“Kids are happy to get mail,” he said. “We’ve already heard many great comments from parents about it.”

He said a positive behavior reward system has been shown to be very effective and that by the end of the year teachers will have sent at least one postcard to every student each month. The school is also using Toro Tickets to support good behavior.

“Toro Tickets are also given for good behavior,” explained Allen. “Every morning we use the letters from the Toro Tickets to say ‘Terrific students at SME are On task at all times, Respectful to all, and Obedient.”

Allen said that the tickets were printed wrong and instead of them being a third of a page they are a half-page. But it was a serendipitous mistake.

“The students love them because they are so big,” he said smiling. “Teachers give out up to three of them per day in their classroom. Sometimes it isn’t easy to find the positives with some students, but we need to celebrate the little things.”

Allen is very complimentary about his staff and he says “I have the best team I could work with.”

He says that he often feels they do not get enough credit for what they do because working with kids is not a set thing all the time. There is no standard model of students; they are all different and require different kinds of attention and care.

Working at a school can be difficult at times, but the humor that crops up with kids in the mix often makes tough days a little easier. Allen mentioned that his food staff is short one person and right now it is hard to find people who want to work in those kinds of jobs.

“I spend a lot of time in the lunchroom because of that,” he stated, as he laughed. “I am lucky I have my food handlers permit so I can help out. Some of the students have been referring to me as a ‘lunch lady’ but the best comment came from a couple of kids who called me ‘chef’. So I have taken that to heart and when they call me that, I tell them that I have been preparing their lunch for hours.”

He sees the kidding as a positive way in which to interact with students.

“We as a team want students to not only succeed academically, but we also want them to succeed in life,” he said. “We want them to go for their dreams and to put everything they have behind those aspirations.”

As for COVID and as the concerns about that continue, Allen feels that the school has gotten pretty much past it at this point.

“After last year, I think the worry is still there. But everyone is trying to get back to normal. The teachers want to see their students' faces. And I think the students really want to be here. I honestly feel that the pandemic has brought everyone in the school closer together because going without people is hard. Looking at last year in retrospect, it was very difficult, but we got through it. It proved we can do hard things. I think we make real growth when we have hard things to do and get through them,” he concluded.