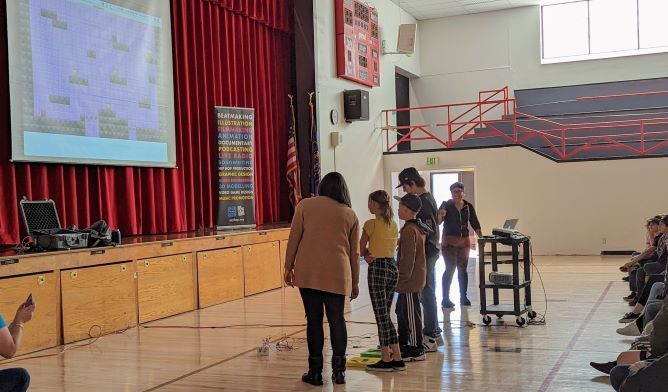 On Tuesday, December 6th, Helper Middle School had an assembly by Spy Hop; Spy Hop is a nonprofit digital media arts center that offers hands-on project-based programming in Salt Lake City and across the state of Utah for students 9-19 of all skill levels and aspirations. We meet young people where they are in their lives and invite them to tell their stories through film, music, audio and design. Our model combines youth development, arts education, and career preparation to empower young people to gain the skills they need to be successful.

The company representatives talked with the students about game programming and game user interface. Students had the opportunity to play their way through a platformer game similar to the original Mario game where three to four students used their feet to control the red block avatar. There were foot touch-pads with ⬆, ⬇, ⬅, and ➞. The students’ excitement was palpable as they cheered on their classmates playing the game.