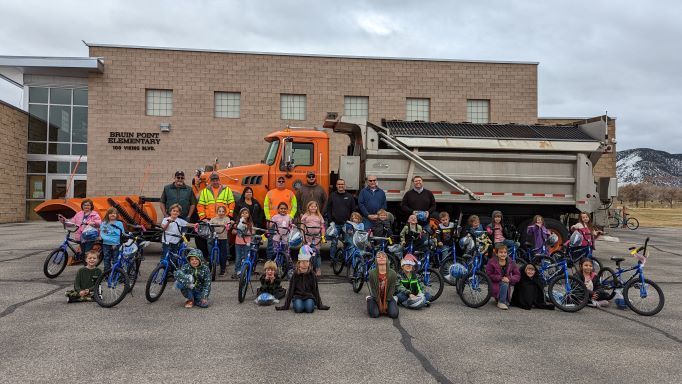 Just in time for the holiday season, on December 7th the students in first and second grade at Bruin Point elementary school were each given a bicycle and helmet by representatives from the Utah Department of Transportation, including the regional director, several additional team members, and the Wellington UDOT crew.

UDOT holds an annual conference where charitable work is among the discussed topics. This year, they partnered with Wish for Wheels - a non-profit organization - which organized a team building activity for UDOT to build 100 bicycles to be given to children throughout Utah.

Team members at UDOT asked for input to determine where these bicycles might be appreciated, which led Dan Hinckley - a Price local and UDOT employee - to identify Bruin Point as an ideal candidate.

UDOT donated nearly 30 bicycles to the Bruin Point students. Monte Aldridge, UDOT Region 4 Director said, “As we approach the holiday season, bringing the gift of bicycles to these children brought so much joy into all of our hearts.”