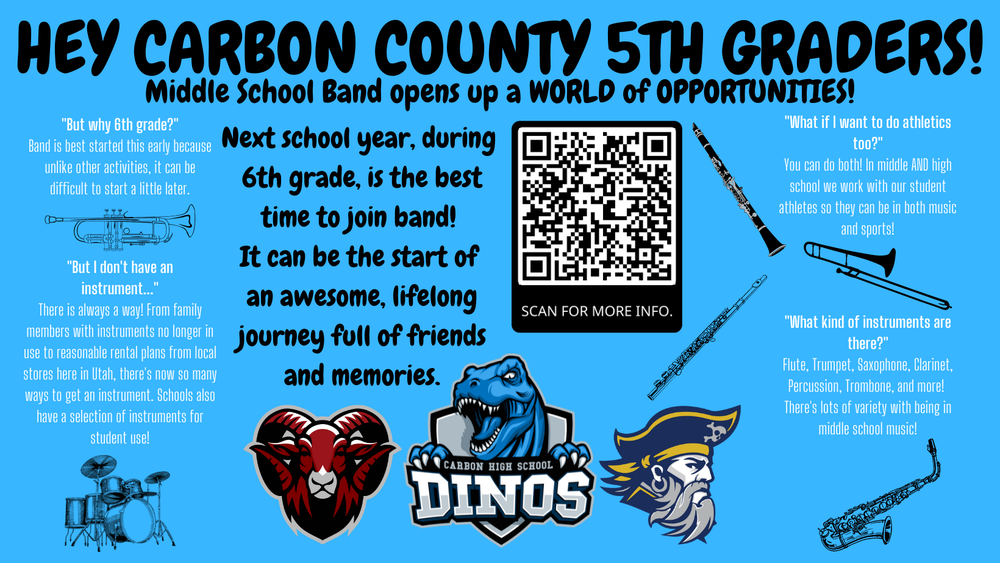 On March 16, the Carbon High Jazz Band visited four of Carbon County’s five elementary schools. The purpose of the visit was two-fold. First was entertainment and practice for the Jazz Band - which is traveling to State Competition at Alta High School next Friday.

The second purpose of the visits was to introduce each school’s 5th graders to Band and how awesome it can be. CHS Band Director, Adam Cunningham, informed the students that 6th grade is the best time to start a Band career. He told them that it takes a lot of practice, dedication, and good hard work to be successful in Band.

Cunningham included and introduced the district’s middle school band directors - Marcos Navarro of Helper Middle and Chris Livingston of Mont Harmon - who both also stressed the importance of joining band.

At Wellington Elementary, after the introductions, Cunningham turned to his students and asked them what they wanted to start with. Nearly unanimously they responded, “Rockin’” After which they launched into a lively rendition of “Rockin’ on Top of the World.” Many students and adults “seat-danced” or tapped a foot along to the beat. The number featured two improv solos; one by saxophonist Lily Spendlove and another by trumpeter Jerry Anglesey.

At the conclusion of the number, Cunningham took a moment to introduce the different instruments a student can choose from; asking various members of the Jazz Band to show off each individual instrument. Starting with the clarinet, played by Mattie Chiara, and the flute, played by Lily Spendlove. Cunningham, Livingston, and Navarro all expressed how crucial clarinet and flute players are in a band and encouraged students to start there if they have never played an instrument before. Cunningham went on to explain that clarinet players especially can quickly learn most other woodwind instruments - highlighting the fact that Mattie Chiara had only just started playing the alto saxophone this year.

After the clarinet and flute, Cunningham introduced the brass section of his band with trombonist Jeremiah Ison and trumpeter Justus Clark. Next was an introduction to the remainder of the woodwind section with alto saxophonist Garret Bryner, and tenor saxophonist Adam Kemple. That concluded the traditional band instruments after which Cunningham introduced his bass and electric guitarists Rusty Seeley and Gradee Noyes, and on the electric piano was Pierce Bryner. Cunningham concluded with introducing his most versatile players, the percussionists. He explained that most students who do percussion learn many different percussion instruments. He then introduced his students Connor Bulkley and Brenden Bryner who took turns playing the drum set and the bongos.

One Wellington student had a question for the guitarists following the introductions, “Have you ever heard the song ‘Sweet Home Alabama’” to which the Jazz band spontaneously responded by launching into the classic by Lynyrd Skynyrd - much to everyone’s enjoyment.

The Jazz Band wrapped up the mini concert by playing My Funny Valentine featuring trumpeter Justus Clark. Smooth jazz enveloped the audience and the room and brought the performance to a calm close. The three band directors ended with a reminder to sign up for Band if they can and to not let anything hold them back. They also described the resources there are for participating in Band and assured the students that if they wanted to do Band, they (the directors) would make sure it happened.